The principles of Pilates (part 6)

With Pilates the way in which the exercises are executed is of more importance than the number of repetitions completed or the exertion used. Mastering a simple exercise is often far more complicated than producing a larger movement!

Joseph Pilates created 6 principles of Pilates, but over time these have been added to and there are now deemed to be 8 key principles:

“Contrology [the original name for Pilates] is designed to give you suppleness, natural grace and skill that will be unmistakably reflected in [all you do].” J Pilates

In Pilates, exercises are performed as smooth flowing movements so that muscles are continually being toned. When there is no control of the movement muscles are being under-utilised and there will not be the same toning result.

In addition, by moving with conscious muscular control and flow, you will eliminate stiff/jerky movements which may over time create faulty movement patterns and contribute to injury. 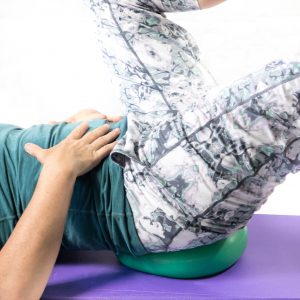 When we extend limbs to their end-range, we are more likely to lose control over the associated muscles and joints. For example, if you extend your leg to kick something without consciously controlling the muscles, the fast movement can create a ‘snapping’ or ‘locking out’ of the joint. If this movement is repeated frequently it can lead to joint pain caused by wear & tear and weakness in the supporting soft tissues. Allowing the movement to flow with control will reduce the possibility of damaging the joint.

In particular, people who are hypermobile (double-jointed) need to avoid over-extending their joints – they should extend only to the point where the joint remains ‘unlocked’. Initially they will feel that they have not fully straightened the limb but to anyone else it will look quite normal. Over time they may be able to reduce their hypermobility by consciously limiting the range of movement at the susceptible joints and by increasing the fluidity of their movements to avoid snapping or locking out.

Stiff movements can also occur when there is relative muscle tightness in certain areas of the body. For example if the hamstrings (back of thighs) are tight/shortened the gluteal (buttock) muscles will usually be lengthened and weak which will have an impact on postural alignment and movement patterns. Over time, increased fluidity of movement will help to establish a better balance between the opposing muscle groups and restore improved function and posture.

When practising Pilates (and in everyday life) try to keep your movements flowing & continuous. Think of ten repetitions as one continuous movement rather than one separate movement repeated 10 times. Think of moving in a relaxed manner with graceful transitions between exercises.